The best areas to stay in Berlin

Cheap and economic accommodation to stay in Berlin

Best accommodation to stay in Berlin

The city of Berlin is the capital of Germany, located in the northeast of Germany, has a population of 3,5 million inhabitants and is the most populous city in all of central Europe.

Its streets and its Tourist attractions are countlessIn addition to housing great historical content, it also evolved into a very cultural city.

Berlin is a city that has many libraries, museums, galleries, music events. There is the most famous philharmonic orchestra in the world, and also the opera of the German orchestra. Regarding the theater, he has the great Berliner Ensemble one of the best theater companies in the world.

Si quieres go through every corner without missing the most beautiful details that may have one of the cities prettiest on the continent: this is your guide.

One of the biggest and advantages that Berlin offers as far as accommodations it refers is that it has as much variety as tastes and economies they visit her. Hotels, hostels or apartments of different sizes and prices, which are spread throughout the German capital.

In order to make the most of your stay, we offer you a small guide with the best areas to stay in Berlin: the most tourist, the safest, from which it is easy reach any point in the city, walk on foot or eat and shop without problems, near your hotel. 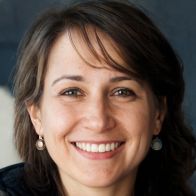 Nuria Sánchez
Hard-core traveler and fond of publishing content on social media, I write about the destinations I have met on my travels around the world.

Mitte, the center of the city

Mitte is undoubtedly the favorite of tourists since it is located in the eastern part of old Berlin, it has many amazing hotels in very central places where you can enjoy the attractiveness of the city.

The life of the center is completed with clubs and parties, business life and fine restaurants, culture, art and history. Mitte is divided into six main areas that bear the names of Wedding, Moabit, Mitte, Tiergarten, Hansaviertel and Gesundbruner.

If you are looking for accommodation in the capital, there is a Huge variety of hotels in Mitte Berlin, like hundreds of restaurants or bars where you can enjoy a good German beer.

This is one of those areas that never sleep and where there is always something to do. 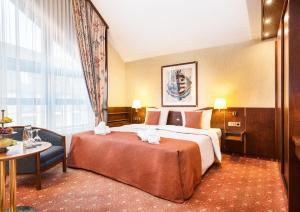 Berlin
8.5  FABULOUS (522 comments)
See Price Now
This 4-star hotel is quietly located on the banks of the River Spree, in the center of Berlin, between Alexanderplatz and Checkpoint Charlie. It offers well-equipped rooms, a fitness center and a restaurant.

The district of Charlottenburg is located to 5 km from the center from Berlin which makes it not the most convenient area if distances are involved, but if you don't mind taking the subway (the frequency is high and It takes 20 minutes to get to Mitte) the Hotel offer is much broader and cheaper.

It is a very commercial area, full of shops and restaurants where to dine or have a drink, making it a good alternative for those looking for cheap accommodation in Berlin.

Offer electronics stores, international apparel, the department stores of Forever 21, H&M and a large and varied food industry available to tourism. As for the neighborhood is very picturesque, on foot you can visit the Charlottenburg Palace and the zoo. 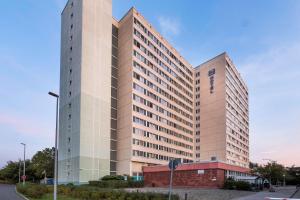 Berlin
7.5  VERY GOOD (342 comments)
At 51.3 EUR
This family-friendly hotel features a bowling alley with 8 tracks, parking and free Wi-Fi, and is located in the Berlin district of Lichtenberg, just a 30-minute drive from Alexanderplatz.

The Circus Hotel
Berlin
9.2  EXCELLENT (487 comments)
See Price Now
This hotel lies in the heart of Berlin, between the popular districts of Mitte and Prenzlauer Berg. It is directly opposite Rosenthaler Platz Underground Station, 2 underground stops from Alexanderplatz.

Friedrichshain-Kreuzberg, the youngest and coolest area

This is the district where the emblematic is located East Side Gallery where you can see the remains of the Wall that divided East Berlin from West Berlin, today intervened with works by different artists and painters from around the world.

The location is more comfortable than the previous Charlottenburg neighborhood since It is possible to reach the city center with a walk of about 25 minutes approx.

This neighborhood has a great commercial and gastronomic offer and the accommodations offer more affordable prices than Mitte.

It is, interestingly, one of the favorite areas of the young people by environment cool of its bars and restaurants. 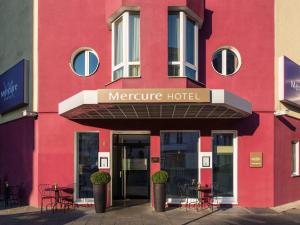 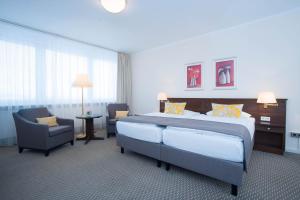 Berlin
9.7  EXCELLENT (524 comments)
See Price Now
This 3 hotel with extras is located in the center of Berlin, at 600 meters from the Kurfürstendamm shopping street and the famous KaDeWe department store, and offers beautiful views of Berlin from the upper floors.

Schöneberg is one of the best neighborhoods and a of the most beautiful areas of Berlin. Located near the Ku'Damm, it is a neighborhood that, without being the most central, is close enough to the center to be a good option for sleep in berlin.

While the gay scene in Berlin is diversified enough, Schöneberg is the characteristic district, for being there where in 1989 a monument was installed inside Nollendorf Square in commemoration of the homosexual victims murdered during the Holocaust. Schöneberg has a wide fan of restaurants and bars of interest to the LGBT public.

Schöneberg is a elegant, quiet area, and with few tourists, but that nevertheless has a good number of hotels and affordable pensions, and apartments for rent. It also has some excellent connections with public transport which allow you to reach Mitte in a few minutes. 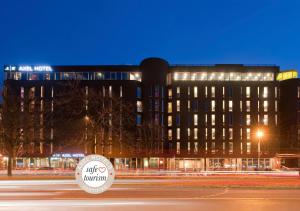 Berlin
7.3  VERY GOOD (428 comments)
See Price Now
Axel Hotel Berlin-Adults Only offers accommodation in the Schöneberg district, just 1,4 km from Kurfürstendamm. It has a restaurant, a fitness center, a garden and a rooftop bar with panoramic views.

Berlin
9.3  EXCELLENT (643 comments)
At 48.6 EUR
This 3-star-superior hotel is located in the Charlottenburg district of Berlin, between the Berlin Exhibition Center and the Kurfürstendamm shopping street.

The best hotels to stay in Berlin 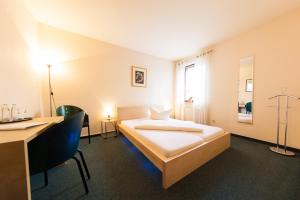 Garni-Hotel An der Weide
Berlin
This family-run hotel is located in the quiet Berlin district of Mahlsdorf, next to the main road that connects the city center with the beautiful surrounding countryside, the B1.
Double room from: n / a 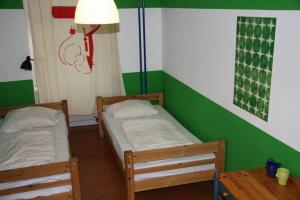 Lette'm Sleep Berlin
Berlin
This hostel is located in one of the most popular and trendy neighborhoods of Berlin; in the district of Prenzlauer Berg. The Lette'm Sleep offers a pleasant and relaxed atmosphere near the center of Berlin, just 3 metro stops from ...
Double room from: n / a 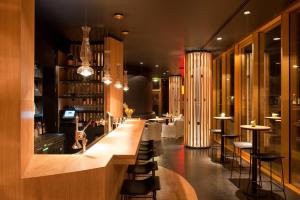 Hotel AMANO Rooms & Apa ...
Berlin
This design hotel is located a few minutes walk from the Hackescher Markt entertainment district, in the center of Berlin. It has free Wi-Fi connection, patio-garden, roof terrace and underground parking.
Double room from: 56.5 €

Leonardo Royal Hotel Be ...
Berlin
This top-star 4 hotel features a sauna and fitness area on the top floor and offers rooms equipped with air conditioning and free Wi-Fi.
Double room from: 62.1 €

Leonardo Hotel Berlin
Berlin
This 3-star-superior hotel is located in the Charlottenburg district of Berlin, between the Berlin Exhibition Center and the Kurfürstendamm shopping street.
Double room from: 48.6 € 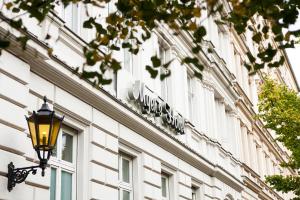 Myer's Hotel Berlin
Berlin
This 4 star boutique hotel occupies a historic building located in Berlin, in the trendy Prenzlauer Berg district, 10 or 15 minutes by public transport from the city center.
Double room from: 127.5 € 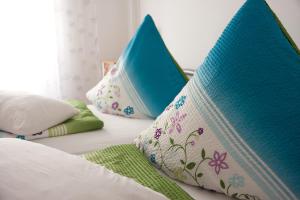 Apartments City Room Be ...
Berlin
These spacious apartments are located in the trendy Prenzlauer Berg district of Berlin, less than 300 meters from the trains. They have a flat-screen TV, free Wi-Fi and a fully equipped kitchen with a dishwasher.
Double room from: n / a

The Berlin hotels The center is mainly located in Berlin Mitte, where the tourist attractions are located, such as the Brandenburg Gate, the Charlottenburg Palace or the mythical Alexander Platz and its world clock. Who doesn't feel like booking a hotel in Berlin?

You are looking for Hotels in Berlin? The hotel search engine offers you Berlin Cheap Hotels at the best price, helping you find the most central hotels, the best connected, or the most charming places. Stay in hotels in downtown Berlin with the cheapest rates.

You can organize your business trips, your weekend getaways, your next bridge or your summer vacation. Our search engine Hotels in Berlin will offer you a selection with the best prices to reserve your Hotel in Berlin.

One of the most popular streets is that of Unter den Linden, with numerous souvenir shops, bars and restaurants and where the central and luxurious Hotel Adlon Kempinski locates its rooms. Another tourist attraction, due to its proximity to the Mall of Berlin, the Holocaust Monument and the Berlin Wall, is Potsdamer Platz where four and five star hotels such as Hotel Mandala and NH Berlin Hotel Potsdamer Platz are located.

In addition to other cheaper accommodation options at the Hotel Berlin, with high flexibility in arrival and departure, or the Leonardo Hotel, with a wide range of hotels near the main points of interest in the city.

The same happens with Alexanderplatz in which there is a bahn station of the same name that connects to Schönefeld airport and where you can find the Ibis styles budget Berlin Hotel and the Alexander Plaza hotel, both with breakfast included, free Wi-Fi and cozy rooms.

In addition to the offer of cheap hostels, hostels and hotels in Berlin, which thanks to its proximity to the Berlin bahn transport network will allow you to know all the parts of the city that you plan. Book your hotel in central Berlin now!